​The Irish Pavilion at the 57th Venice Biennale 2017

My broken bones shall be a weapon,
​
chaos is the bread I eat!
​ 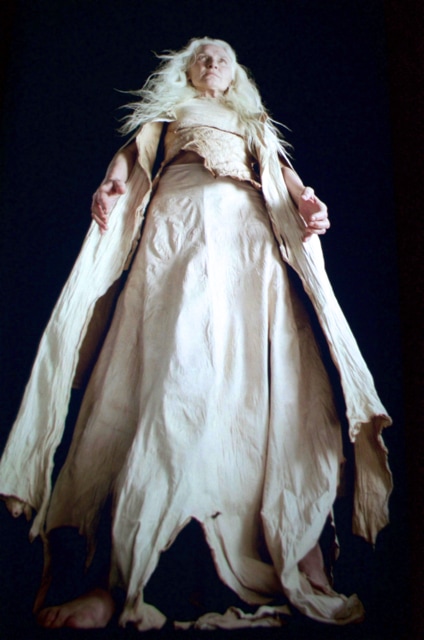 Photo of Jesse Jones’ installation by Anne Murray
​With an impressive sense of dignity, profound understanding of the human condition, and in full knowledge of the challenge that women face in a rapidly morphing set of boundaries created through elusive and divisive judiciary systems in Ireland and abroad, Jesse Jones has created a meta world which challenges the legal system, where what we think and see implores us to react and evolve or suffer the vile subsistence living that will ensue in the storm of chaos unleashed in the form of women forced to take justice into their own hands.
Tremble, Tremble, curated by Tessa Giblin, is more than a pavilion, it is a space between, a space possessed by magic and where fears take shape in an unearthly form, as a human buried under the bog, preserved in flesh, but morphed, shapeshifted into something beyond comprehension.
Here, women have an enormous tempest of power controlled only by the force of the black hole of the body of Olwen Fouéré , as a photon encircling  and drawn into it only when encountered by the the Higgs boson particle, a weight that gives our thoughts as light mass, and thus, slows us down; we are trapped in this hole with her, as if time would stop or else become eternal, both one in the same. 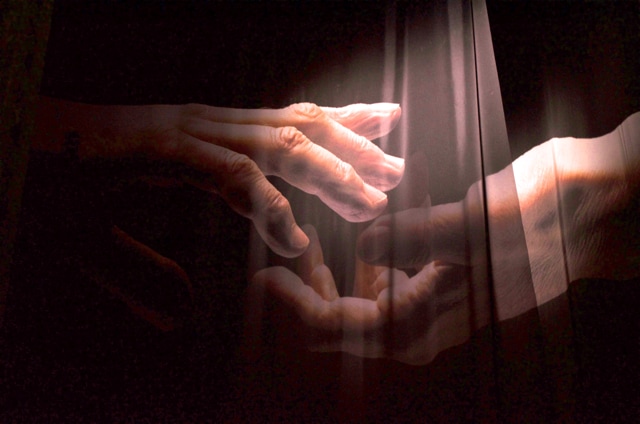 Photo of Jesse Jones’ installation by Anne Murray
​The performer, a witch pulling the strings of the legal system as if she could change all, at the wave of a finger or by towing a cart filled with fallen furniture, is a challenge by her sheer size and demeanor alone, but her words haunt us. As the work unfolds, two gigantic curtains are heard moving along tracks and encircling us, portraits of the artist Jones’ mother’s arms photo-printed upon diaphanous black fabric curtains, they stop with the two hands cupped over an invisible orb, the implication is the Earth, our world in her hands. The arms as giant as Ozymandias disembodied, strong and alive with light. Later, when the curtains move again, each arm encircles a sculpture of a bone, perhaps the bones of the witch herself pulled from the preserving womb of the bog and wiped clean for this display, they suggest the power of potions, a talisman, and reliquaries.
The artist Jesse Jones worked with the performer Olwen Fouéré and composer, Susan Stenger, forming a triangulation akin to the Morrigan or the infamous witches in Macbeth, who could see the future passing one eye to share with another.  The sound is perfectly aligned, mysterious, startling and eerily haunting.
We see performance artist, Olwen Fouéré , a collaborator in Jones’ production, who taunts us from her position of power on a twenty or so foot projection screen, “Are you ready for chaos?” her voice challenges us. At first her shoulders thrust back, in a power stance, as advertised by those advising us on television and the internet to take this position to equal our stance in the presence of those who would oppress us in the work place, Fouéré floats down from the upper left hand corner of the screen, growing larger and filling the space as she emerges, a tall witch clothed in homespun clothes of some earlier epic. Her sheer height with her exaggerated perspective looking down on us, brings to mind the powerful dragon shapes of the Northern lights as seen hundreds of years ago and their mysterious movement across the night sky without explanation or constancy. She appears then across the room, another screen holds a close-up of her face her wrinkled and ashen skin warns us of our own mortality. We see lips and hair and teethe.
I am reminded of a remark made by a board member of Chapter in Cardiff, about how a woman becomes invisible as she reaches middle age; in the work of Jesse Jones, the woman as witch, is not only visible, she is a deity standing over us casting spells with her defiant words. 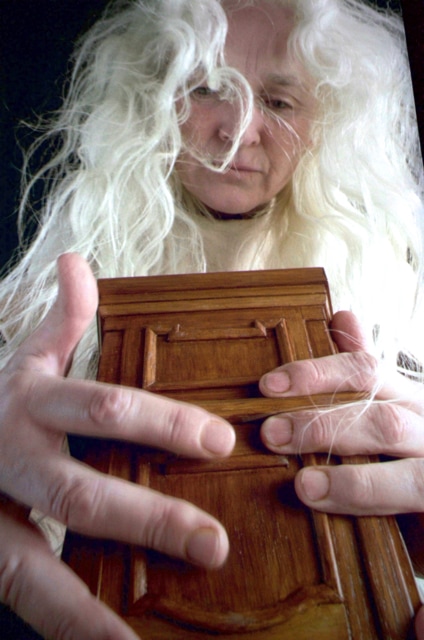 Video of the Irish Pavilion installation at the Venice Biennale 2017 from Anne Murray on Vimeo.

video of Jesse Jones' installation by Anne Murray
Have you had enough yet, or do you still have time for chaos? Huh, more? I’ll be watching you. You won’t forget us, even if you try and sweeps us away.

In an archaic text projected on the wall one reads:

Whoever believes that any creature can be changed for the better or worse? And bring it to utter confusion. They could destroy the world for if it were so.
One remembers the works of the artist Annette Messager comparing the different roles of women in history, as the temptress and the trickster, but here the witch is somehow more than just a symbol, something visceral, dangerous and possibly more wise than one would like to know; it is as if all the projected fears of 800 hundred years of women’s history have given birth to the vile woman that each of us is secretly perceived to be, the monster that apparently many cultures think exists inside of us.
But, is she a monster, or a witch, or just old and wise and eating chaos in the same way a mother follows in the wake of a family and all its chaotic existence in daily life, picking up toys and clothes, and cleaning up? What exactly is Jones trying to tell us here, what does she want us to realize?
Tremble, Tremble, conjures up images of witches in a subliminal way, somehow the repetition immediately drawing out one’s memories of Macbeth and the three witches chanting. The title comes from a chant made by Italian women fighting for wages as housewives in the 1970’s, “Tremate, tremate, le streghe sono tornate! (Tremble, tremble, the witches have returned!)”.
This exhibition lives up to this immediate reference of our collective unconscious, connecting the Italian historic words of women protesting for their right to wages and women all over the world fighting for their rights in historic Women’s Marches that began in Washington, DC this past January 2017, and have spread in solidarity across the planet.
If you can, go see it and stay for all 27 minutes, it is worth every second and will stay with you until you decide what you are going to do to change the world, the legal system, and to fight for women’s rights, because women’s rights are everyone’s rights, we are your mothers, sisters, daughters, students, and we need you to stand up for us and eat the chaos before it eats you.